Mudeungsan National Park (무등산) became the 16th mountainous national park in South Korea just one year ago, April 2013.  Previously it was a provincial park in Jeollanamdo Province.  With an upgrade to the big leagues like that, it’s gotta be good, right?!?  Elicia and I went in March to check it out for ourselves.

Above is a Korean Naver Map that shows Mudeungsan’s location along with some other key hikes we’ve done so far.  It’s convenient to those living in Gwangju.  In fact, it’s so close to the city that even public city buses can take you right to the trailheads for good hiking or temple-viewing.  Since Elicia and I are proud owners of a 17 year-old Hyundai Avante (named Sylvia) we drove from our apartment in Yeosu (Doslan Island) to Mudeungsan, which is about a 2-hour journey.

Below you can see a detailed Naver Map that shows where we parked and also the trails we explored around Mudeungsan.  You’ll notice that we didn’t do an out-and-back or a point-to-point.  I really strive to get the most out of each park we visit, so I look at maps ahead of time and try to deduce a super-awesome plan that sends us around all the highlights of the park, always to be sure to include the summit as the main course with a side of temples, waterfalls or other culturally significant sights… whatever the park has to offer.  Mudeungsan has several temples and hermitages you can visit. 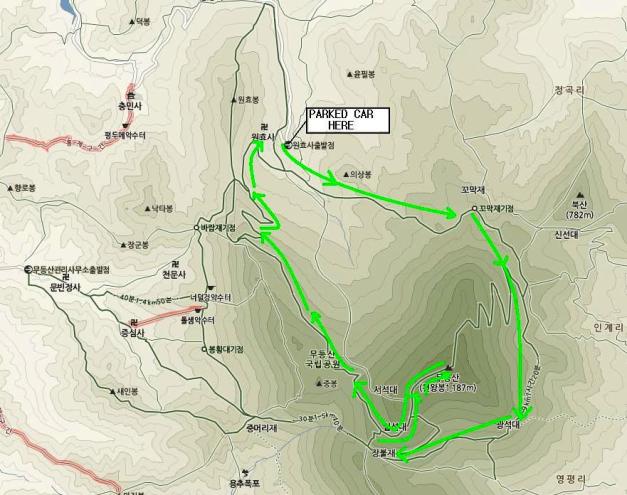 Elevation:  Mudeungsan  is 1,187m high at the top, so it’s pretty far from the ‘monsters’ of Korea as found in Jirisan (1915m), Hallasan Mountain in Jeju (1950m) or others.  But, don’t let it’s shorter stature fool you into thinking it’s an easy hike, like a stroll in the park.  The trail head where we started was between 350m-400m elevation, so it’s still a solid 800m+ vertical gain to the top (2,625 feet).  Fortunately, the trails in Mudeungsan were pretty long and gradual, so the slope wasn’t a killer like it was in Woraksan, for example.  All in all, the elevation isn’t too bad in Mudeungsan.  Sometimes long and easy is better than short and difficult.  Both get you to the top, though, and ultimately that’s what is most important!

Down at the bottom, the sun was shining, the air was warm, and spring was beginning to show its signs…  many of the plants and trees had completed their chameleon-like change from winter brown to spring green.  We welcomed it and it was nice to begin our hike in a long sleeve t-shirt and worry about being too warm!  Not bad for March.

The beginning of the  path we were on was quite pleasant.  Relatively flat terrain sprinkled with nice rocks in the woods.

The sun was warm, we heard birds chirping.  It was hard to believe (and we had almost forgotten) that it snowed just two days earlier.  Down south in Yeosu we didn’t get any snow, but up here in a little elevation where it’s cooler, there were some traces of snow still present: 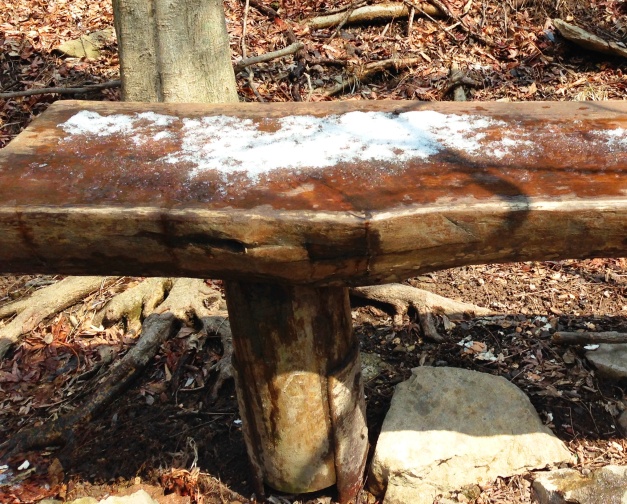 So as it melted on this Saturday, it made the trail a little muddy.  Aka = fun.

Eventually we got to the side of the mountain, where there wasn’t much but a simple walk-way and a bunch of brown plants on the left… trees and forest on the right.  The winds picked up a bit, it was getting cooler up here.

Back into the woods we went, and more and more snow remained the higher we went, generally only where the shade provided the snow protection from the warm sun.  The trail itself was fairly uneventful because there wasn’t too many scenic viewpoints, trail crossings or other people to entertain us!  It was nice and quiet, gentle hiking.  Perfect for this Saturday.

We wrapped around the east side of the mountain and came to Gyubongam Temple.  We decided to take a quick rest stop.  Temples generally provide a natural water source, and we were due for a fill-up.

Instead of simply filling up our water bottles, catching our breath and taking a quick picture like normal, this time was a bit different.  A nice monk with a smile that could light up the room insisted we come inside and eat some lunch.  We explained in broken Korean words that we needed to hurry because only a few hours of sunlight remained, and we still had to get to the summit and down the other side where we started.  He laughed and smiled.  Ok, so we settled for bananas that he gave us and he filled up our waters for us.  Even though we don’t share the same religion, I’d like to learn to smile and laugh like him, not to mention his generosity towards all visitors. 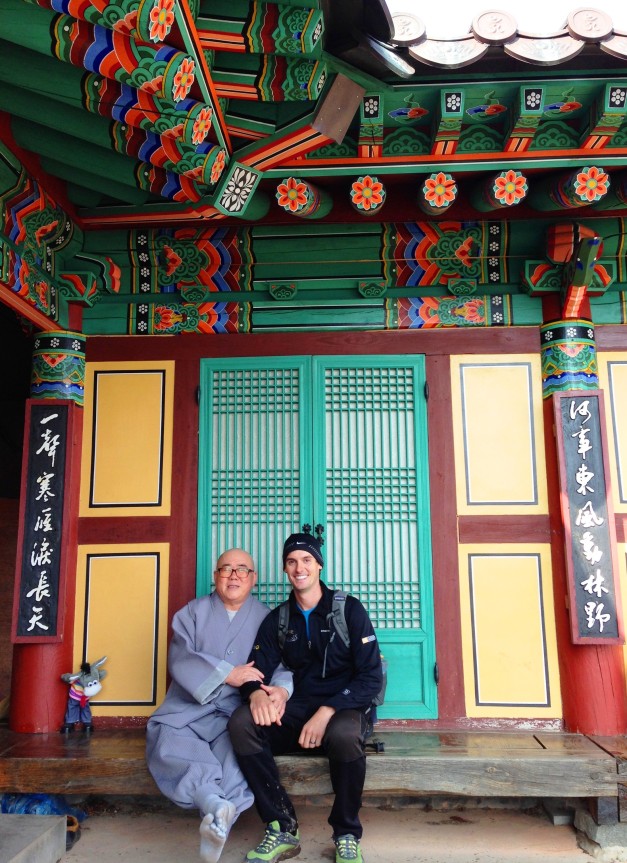 So, we carried on above the tree-line and Mudeungsan finally came into view:

We just had to get to the top of that thing, and back down the other side.  It was already 4pm so we were on the double up to the top.

Unfortunately, the picture below shows about the point where our hike had to stop.  Gates prevented us from going up to the tippy-top of Mudeungsan.  Normally I would have been disappointed, maybe even a little frustrated since it’s a goal of mine to reach the summit of each mountain.  BUT, I had neither of these feelings today because there’s a big building (maybe for military?) right near the top with a service road (yes, you could drive to the top).

To me, part of the joy and satisfaction of hiking to the top of a mountain is to think about the journey it took to get there and how remote the summit is.  Typically there’s a few people sharing laughs and snacks.  And if I think about a summit, I don’t envision cars or a huge building adjacent to the look-out point.  When you can see service cars (for internet/cell phone providers) driving up and down the road to service the towers… it’s kind of a turn-off.  Long story short, I was ready to get off the mountain.  Sure, it was beautiful and we had a nice day, but I wasn’t itching to hop the gate to reach the top when clearly the trail was closed for either maintenance or something else.

So, back down we went:

On the way down I stopped to check out a bird.  As a young boy I was fascinated by birds… and I think a part of me still enjoys birdwatching.  Elicia got a good picture of me in this process: 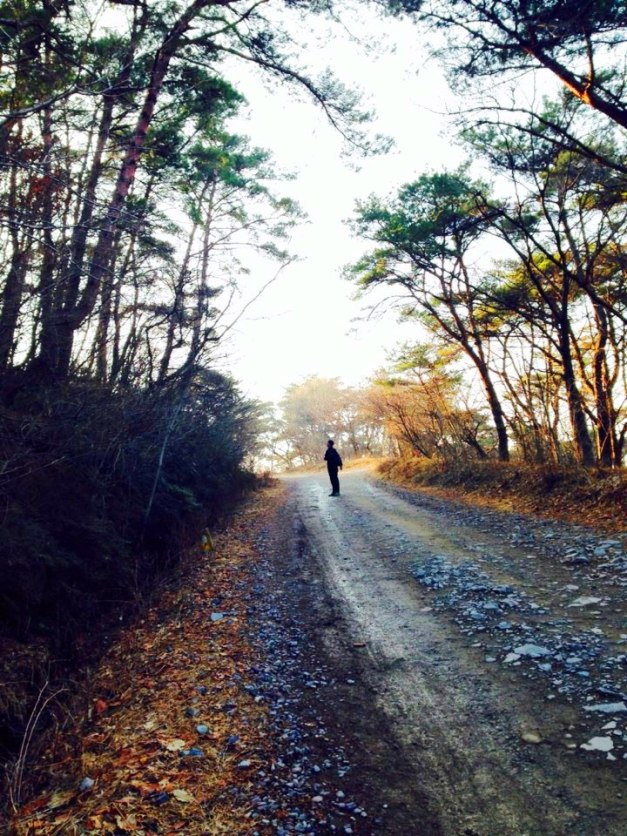 As the sun was nearing the horizon we came back to our car which was conveniently parked next to Wonhyosa Temple.  We again walked around and took a few pictures.  This time we didn’t luck out on the water and banana service, but hey, that experience was a little out-of-the-ordinary.  Maybe the first and last time it’ll happen.

Overall:  Mudeungsan is a great park and if you’re ever in the Gwangju area, I’d highly recommend making this mountain the first visit because the park is pretty big, there are several trails of moderate difficulty, and there’s several temples to stop and see.  The top of the mountain leaves a little to be desired due to the cars, temporary closed trail, towers and big buildings, but the beautiful trails around the mountain far outweigh the mediocre summit.  And being out in nature and exploring a new mountain always beats a day on the couch or in a shopping mall, in my opinion.  And, I agree – this mountain is special enough to have been upgraded to ‘national park’ status.