Where:  Deogyusan National Park (덕유산) is in the backbone of Korea, right near the middle of the country.  It was almost a three hour drive from Yeosu.  BUT, because Elicia and I were granted a four-day weekend, we left for Jinju on Wednesday night to catch the famous Lantern Festival (Elicia documented that here).  Therefore, we drove from Jinju to the Samgong-ni park entrance (in the north) to set up our camp and begin hiking.  Deogyusan National Park spans three counties in two provinces, so it’s quite large, but I believe most of the ‘good’ peaks are in the north.  Also, there’s a famous spot for skiing/snowboarding called Muju Resort, and this is actually a part of Deogyusan National Park! 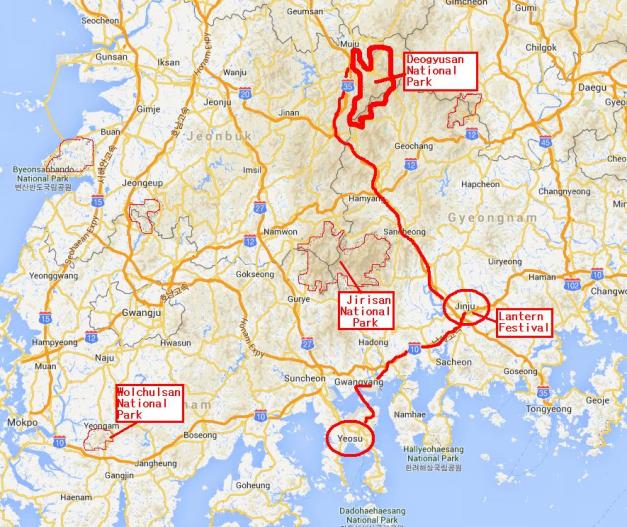 Elevation:  Hyangjeokbong is the fourth-highest peak in Korea at 1614m.  There’s a nice ridge in Deogyusan that also contains Jungbong Peak (1594m), Baekambong Peak, and Seolchebong Peak (top of Muju for skiing).  Elicia and I would draft up a nice loop through the park so we’d see as much as possible!  Here’s a park map, I indicated our route in red with some arrows and circled the peaks we hit (click to zoom): 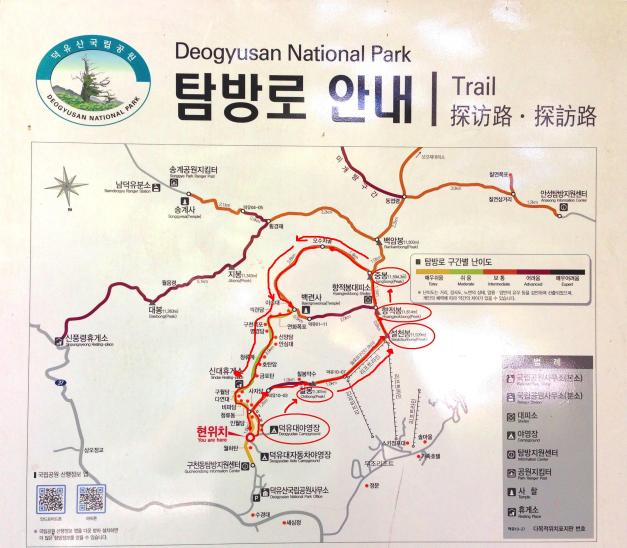 Hiking Highlights:  We arrived at Deogyusan at 11:00am on Thursday morning and promptly set up our tent, snacked a bit, and packed our small backpack for our day-hike.  We stayed at Deogyudae Campground, and I’d highly recommend it.  It was $5 for parking and $2.50 each person for camping (very reasonable!)  I had scouted out a nice 17.1km loop that’d take us along four peaks.  With the sun setting earlier and earlier now in the fall, we had about 6-7 hours of daylight after we departed camp at noon. 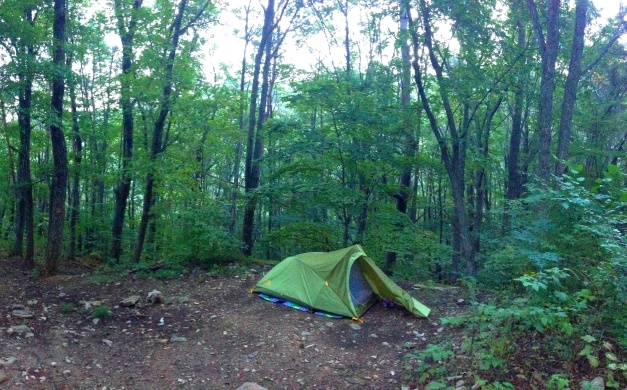 The first part of the trail was beautiful.  It wasn’t too challenging at all.  It followed a stream for a while, there were few boulders/stairs to negotiate, and the km’s went by really fast.  It was highlighted by cool bridge, changing leaves, well marked trails (like normal) and moss-covered boulders.

Well, we knew our luck would run out, and sure enough, it did.  The trail went from easy/intermediate to “hey, here’s 284 stairs that go STRAIGHT UP” type of thing.

Not long after Chilbong Peak (1307m) we noticed we were walking up the slopes of the Muju Resort ski hill!  It was actually pretty neat – instead of being hidden underneath trees that prevent you from sight-seeing, we were out in the open with 180-degree views of the area.  Furthermore, the hiking itself was moderately sloped and not too difficult!

We arrived at Seolcheonbong Peak by 2:00pm.  This is where the ski lift goes to, there’s a warming house (chalet) and some food.  Oh, and tons of people.  It was a public holiday on Thursday, so people were out in masses.  We didn’t see hardly any on the trails, but on top of this peak, they had the gandala-thing running, so it was packed with people.  Despite being crowded it was still pretty neat to see.  I kept picturing this place in the winter, and boy-oh-boy it made me want to come back for some skiing!

A short 0.7km from Seolcheonbong Peak is Hyangjeokbong Peak (1614m) so we follwed the crowd and made the relatively easy walk up to the summit.  Everything up here along this ridge was gorgeous – Elicia and I were both smiling ear to ear when not attempting to converse with Koreans in broken English/Korean. 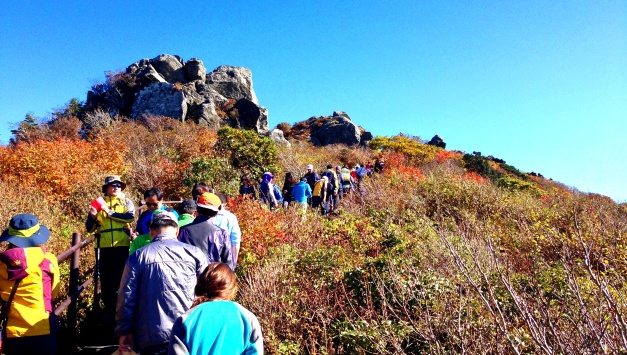 The Summit:  We reached Hyangjeokbong Peak (1614m) at around 3:00pm.  The weather was perfect, and we surely weren’t alone up at the peak!  It was remarkable though.

Other Hiking Highlights:  Instead of doing an out-and-back, we did a nice loop.  To complete this, we needed to walk along the ridge for a ways, then come down the mountain down a different trail.  Literally every single ridge we’ve walked along here in Korea has been uniquely beautiful, and the trails here in Deogyusan were no exception.  The crowds all stayed towards Muju Resort, so from this point on, we were basically alone!  Guaranteed we saw less than eight people from 3:00pm until we finished our hike at 6:45pm.  Here’s some highlights from the ridge as we went to Jungbong Peak (1594m): 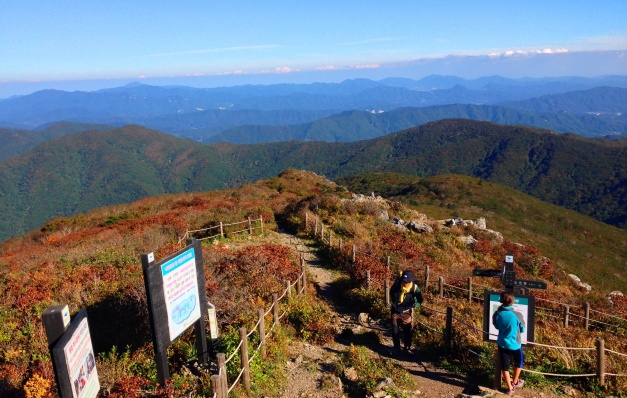 We had a long ways back to our tent in Deogyudae Campground, so we tried to make good time because the sun would be setting quickly (it especially seemed darker because we were hidden from the sun while hiking through the valley).  We eventually made it to Baekyeonsa Temple: 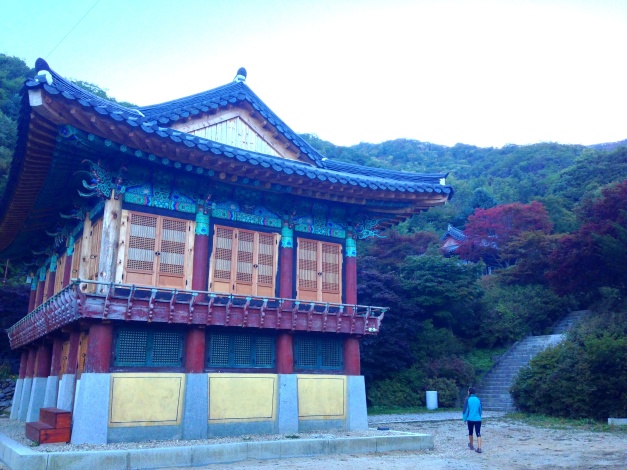 The finish of this hike, just like the beginning, was really nice and easy.  It was a good treat because the sun was setting fast and daylight was diminishing quickly.  We made it back to camp by 6:45pm for some hot soup and fresh fruit for dinner. 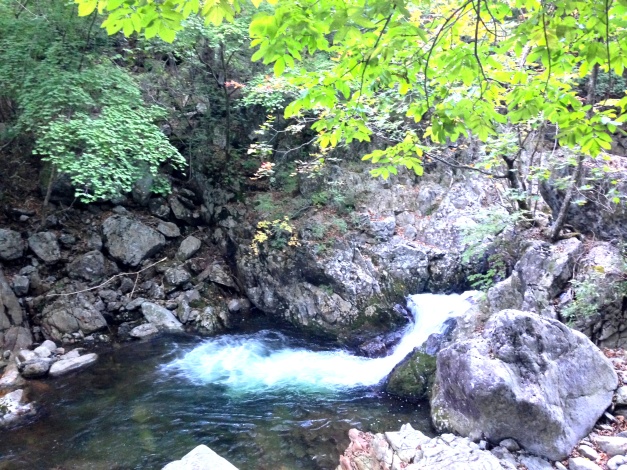 The next morning, we would wake up early to pack our stuff and meet our friend Patrick Graham from Mokpo.  He’s been in Korea two years now and had the goal/idea of hiking all 16 National Parks in Korea before he leaves in November.  So, long story short, we’d pick him up in Cheongju Friday morning and drive together to Songnisan National Park for hiking (with the intention of driving to Woraksan National Park on Saturday).  Elicia and I were attempting three parks in three days… could we do it?   Stayed tuned to find out!

Overall:  As you can see from the pictures above, Deogyusan National Park was really amazing.  Deogyudae Campground was spacious and had nice facilities, and the trails throughout the park were great.  In total we hiked 17.1km in under seven hours, but we weren’t hiking at a fast pace at all.  The well-marked trails, the ridges between the peaks, and the views from the top were really outstanding!  We didn’t see the southern part of this park yet, so when time permits, I think we’ll pay another visit to this park (not to mention a trip for skiing in the winter at Muju Resort).

If you have any questions about camping or transportation to/from this park, don’t hesitate to let me know, I’d be happy to help you out if you’re wanting to go!