Where:  Lying adjacent to Daejeon city (just to the west), one can find a little gem of a protected area called Gyeryongsan National Park.  Claiming to have a ridgeline that resembles a dragon wearing the crown of a rooster (I’ll let you decide…) the beautiful trails and proximity to a major city like Daejeon make it accessible for day-trippers and tour groups alike.  In fact, city buses from Daejeon will take you right to where the action begins at the park’s main entrance near Donghaksa Temple.  Here’s a Naver Map image that shows the park’s location relative to other major cities and national parks we have visited so far in South Korea.

Elevation:  Gwaneumbong Peak is the highest accessible point in the park, reaching a lower-than-average-for-national-parks 816 meters.  There’s several other peaks along the ridge that are similar in stature (649m and 775m, for example).

Hiking Highlights:  In our quest to visit all 16 mountainous national parks in South Korea, Gyeryongsan became the 12th park we stepped foot in and explored.  Now that the thick, humid, hot summer air has given way to a bit cooler and crisp morning/evening conditions, hiking season is in full-swing again.  Our trusty vehicle named Sylvia took us from Yeosu up to Gyeryongsan National Park a couple of Saturdays ago, and the trunk was littered with the usual weekend camping supplies.  Arriving in the park late Saturday afternoon (first was a pit-stop at Wine Korea – something that’s also been on our bucket list) we grabbed a map from a helpful information office and drove to the nearby campsite which ended up being a bit disappointing only because it was a very small site, it appeared you needed a reservation, and it was packed with enormous tents with not even a tiny spot left for our backpacking-style 2-person tent.  Literally, there was no room in the inn.  So, Plan B took action, I whipped open Naver Maps and searched for nearby campsites (캠핑장) and drove just five minutes down the road to what turned out to be a little nature park.  After some negotiation in broken English and Korean (cherades was the main tactic that worked) we were allowed to camp at this little park – turns out about four other tents also stayed the night, but this was not a true camping site.  It was a spacious and tree-filled park, making it a perfect haven for hammocking, drinking the remains of the delicious Korean wine we bought, and having a hot meal from the little propane grill we brought.  We were extremely grateful the park’s workers allowed us to camp – in my opinion it’s 10x better than finding a motel as it keeps the outdoor experience authentic.

“Early to bed, early to rise, makes a man rested and ready for hiking”… at least I think that’s how the quote goes, right?  Our site was cleaned up by 7:00am and we drove the 5 minutes back into Gyeryongsan National Park where we proceeded to park the car, load up our backpacks with the day’s calories and fluids, and walk towards Donghaksa Temple, what would be the start of our loop we’d make throughout the heart of this particular national park.  In terms of our route, here was the plan we devised: 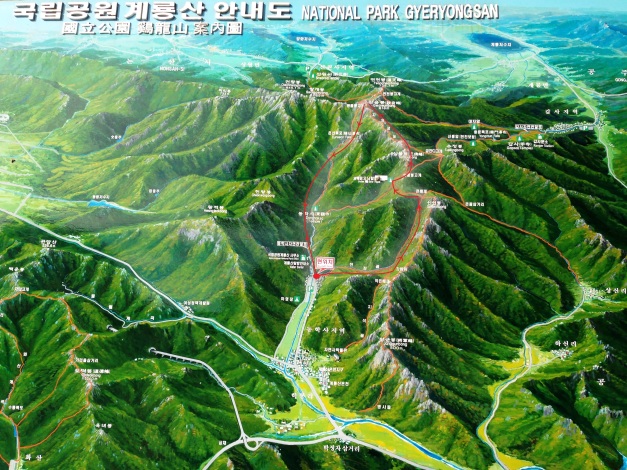 Please note that before we got to Donghaksa Temple, we turned right and enjoyed the gently-sloped trail up towards Sinseonbong Peak and then to Brother & Sister Pagodas.  By all means, it’d also be recommended to complete our route in reverse, but I think the route we took is much easier compared to going straight up to Gwaneumbong and then proceeding along the ridge, then descending.  The slope up from Donghaksa Temple to Gwaneumbong looked pretty gnarly as we came down it. 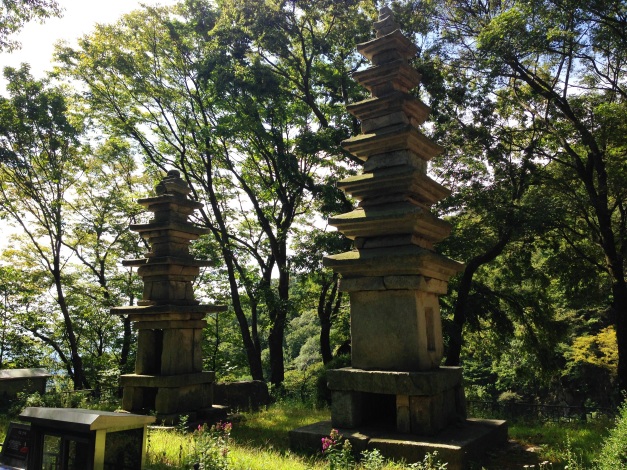 Together with a bunch of other Koreans enjoying the same pilgrimage, we sat down and enjoyed some time in the little area next to the pagodas.  There were several benches and places to rest up – but it was hardly needed as we’d only gone about 2.5kms and so far, it was quite easy.  Shortly after departing up the trail from these cool-looking pagodas, we made our way up towards Sambulbog Peak, which is 775m.

From this particular peak, there was a great viewpoint and we could look ahead and see the trail would be following the ridge-line towards the ultimate destination of Gwaneumbong Peak (816m).  The clean air, blue skies, and misty clouds made for a surreal environment to soak up the warm autumn sun.

For me, the highlights of this particular national park were two-fold:  1) The trekking wasn’t too difficult, so it was easy to see a large percentage of the park in one day and 2) the trail along the ridge was roller-coaster like and very enjoyable, frequently offering plenty of panoramic views in several directions.  It seemed like every two or three minutes we’d come to another clearing in the trees and want to capture some more beautiful landscape pictures.  Looking back at Sambulbong Peak, here’s what she looks like:

Now, with eyes pointed up ahead towards the final peak, here are a couple of action shots as we approached Gwaneumbong Peak (816m):

After a very enjoyable hike across the undulating ridge, we arrived at the base of Gwaneumbong Peak.  We could see a slowly moving streak of brightly colored hikers making their way up the final steps to enjoy the summit. 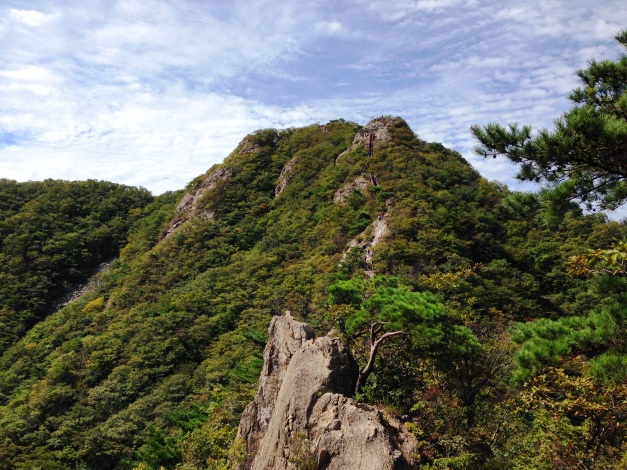 We too, wanted to bask in that summit glory, so we made haste and conquered the final steps.  Here they were steep, but manageable.  We had arrived at the summit and enjoyed watching the hustle and bustle that is so common at summits in Korea:  a bit noisy and crowded, filled with hiking companions sharing food, drinks and laughter, and of course, summit selfies. 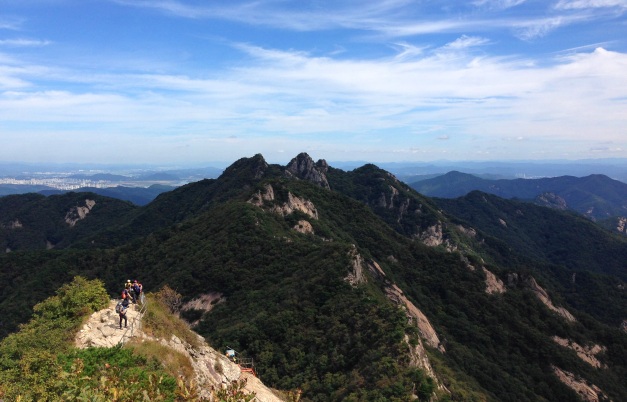 To complete the loop, now all we had to do was get down and finish our hike at Donghaksa Temple.  As previously mentioned, this trail from Donghaksa Temple to Gwaneumbong Peak was way steeper than the trail we took up – I’d take this into consideration if you’re planning a ridge hike here at Gyeryongsan National Park.

We wandered around Donghaksa Temple for a little while and enjoyed the location because the temples were tucked nicely beneath the mountains we had just climbed.  We couldn’t help but look up and smile in appreciation as we reflected on all the sights we saw from up high – now we could enjoy the ground level views with a beautiful temple in the foreground. 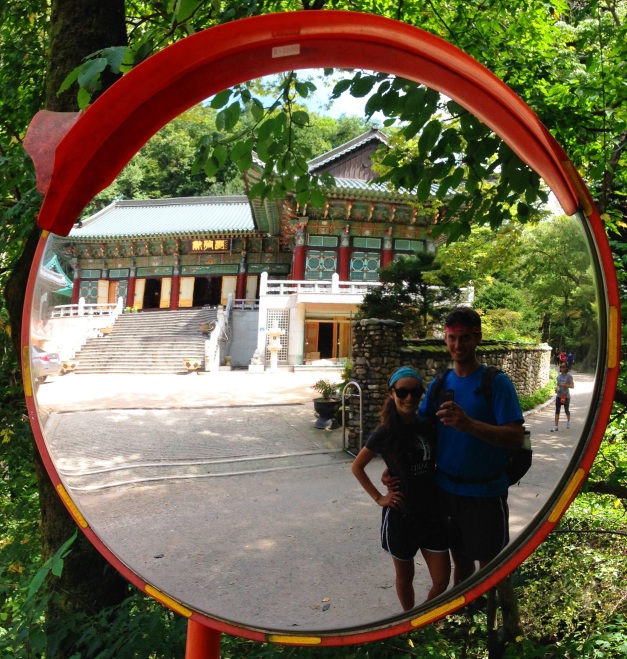 Also knowing we had just finished our 12th national park together, we couldn’t contain our smiles as we exited Donghaksa Temple in search of some traditional post-hike eats like gamjajeon (potato pancakes).  In total we spent roughly 4-5 hours navigating this course, and that was with a few breaks and timeouts for pictures and snacks/lunch.  In general this hiking course was one of the easiest we had completed at a national park, but we were satisfied knowing we had done a loop just about as big as possible throughout this park.  Now with only four national parks to go, our sights are set on sticking to the game plan and filling our weekends with more camping and hiking so we finish all 16 parks before the calendar flips to November!